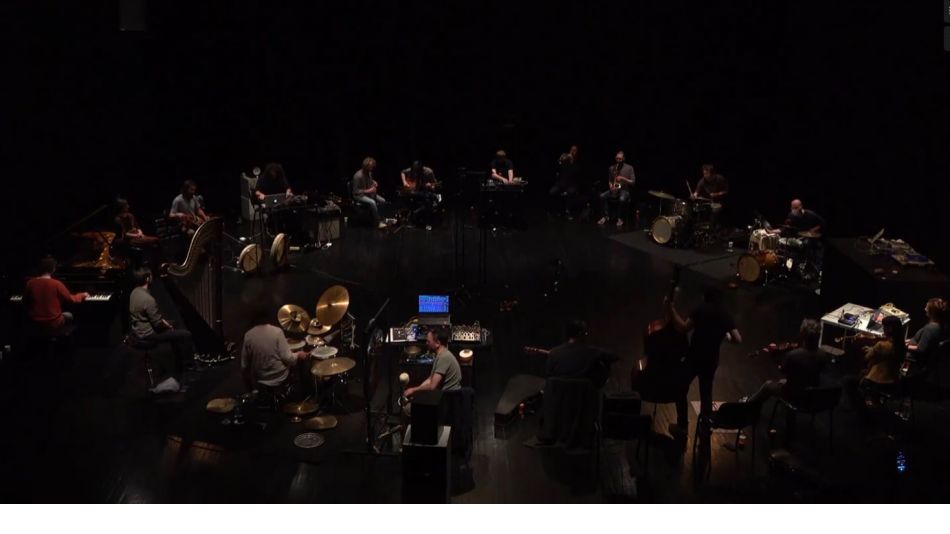 Sound Disobedience On Your Small Screens

The Sploh Institute has been running the festival of improvised music Sound Disobedience since 2012. For obvious reasons, this year’s edition mostly included Slovenian artists.

The 9th festival of improvised music Sound Disobedience, organised by the Sploh Institute, opened a space for reflection on the domestic free improvised music scene. Previous editions of the festival were dedicated to the international exchange of ideas and confrontation of various improvised music scenes and practices, but this time the artistic director Tomaž Grom assembled the local musicians into unique ensembles composed only for festival performances. Each group of improvisers was assigned a sound artist with a history in sound arts, electronic music or DJing. The focus was on the new sound constellations as well as on the contemplation on the broader poetic and aesthetic basis of Slovenian improvisers. In two days (March 30 and 31), five quartets and one trio performed, and on the final, third day (April 1), members of the quartets and trio gathered in an orchestra and performed together.

Tea Vidmar (voice), Samo Šalamon (guitar), DJ Borka (turntables) and Gal Furlan (drums) opened the festival at the Old Power Station in Ljubljana. A crucial part of each festival is a special festival atmosphere, and it’s old news that we’re currently doomed to the spaces within the four walls of your homes. The problem with improvised music is that it’s all the more sensitive to the atmosphere, as it’s somehow based on the slow formation of (musical) relationships which in a live context dictate the fabric of sound and are manifested in even more detail. If we consider improvisation as a communal search for a solution to a certain sound or music problem, it’s difficult to notice all the subtle sounds, movements and hints, which constitute the core of improvisation, from the comfort of your couch.

Of course, there are countless recordings of improvised music concerts. But Sound Disobedience isn’t supposed to land on a future CD; it’s more of a meeting place. Physical presence and the aura, as defined by Walter Benjamin, are indispensable. I can imagine the leitmotif of the second concert with Jure Boršič (saxophone), Irena Z. Tomažin (voice), Rob Canning (sound synthesis) and Vitja Balžalorsky (guitar) was the “sonification” of collective neurosis. The problem with the streaming of performance arts, though, isn’t that we wouldn’t be able to record a performance and reproduce the recorded sound material indefinitely. What the recording can’t capture is the intangible tension produced by the relationships between active and passive participants in a common performance space. In addition, when we watch streams of improvised music concerts, the camera gaze is very suggestive. If as a listener I don’t know what to expect, as music is created in real-time, I can’t prepare for the upcoming sound. But If Marko Jenič (violin) and Samo Kutin (hurdy-gurdy) have such an interesting dialogue at the third concert, and the screen only displays Eduard Raon (harp), the listener's attention will be automatically focused on the repetitive harmonic patterns of the harp. The eye drowns out the ear.

Discussing the first day of the festival, we touched upon technical aspects. Let’s now have a look at the second day. The opening quartet consisted of Ana Kravanja (violin), Rok Zalokar (piano), Zlatko Kaučič (drums, percussion) and Andrej Kobal (GranuRise). We could say that each of the seven festival performances was based around a sound problem or a musical element that was pushed to the forefront. For example, the introductory concert of the second day was centered on a single gesture or texture that permuted over time. The question of group dynamics and hierarchy arises here. The selected festival groups aren’t permanent, they are unique. Although such an experiment can be a great exercise, it can also be difficult, because musicians can always return to the same thing, unable to escape their own poetics and respond to challenges. For instance, the moment when Kaučič introduced a witty change into the repetitive collective improvisation, the break didn’t move the musicians at all. With ad hoc groups, there’s an additional risk of static hierarchical relationships. The role of the “provider” of sound material can rest in the hands of a single musician, while the others try to respond to it or oppose it. At the same time, improvisers may not intimately relate to the sound material enough to continue to shape it. The description of the festival states that “improvised music should be performed regularly”. Developing your own and group poetics is a process, so one-off ensembles are always risky and all the more tempting. But if there’s never a personal and group process going on, the scene simply stagnates.

The act of listening is supposedly crucial in the development of a scene, one's own poetics, the concert, the sound material. How to react if this is exactly what’s missing or if it’s aimed at different sonorities? As an improviser who’s in a constant state of crisis or in search of a direct answer to a problem, how should you respond to a sound art that is more like a static mosaic? At this year’s edition, the main concept was the juxtaposition of different sound arts with improvisation. The same is true of the second and third performance of the second day, which consisted of Ida Hiršenfelder (sound synthesis), Boštjan Simon (saxophone), Drago Ivanuša (piano), Vid Drašler ( drums) and Andrej Fon (saxophone, clarinet), Blaž Božič (sampling), Jošt Drašler (double bass) and Bojan Krhlanko (drums, effects).

The festival concluded on April 1st with a concert by all performers. This performance, too, emphasized the playfulness of juxtaposing often related or even the same instruments that performed in duos. Tomaž Grom arranged the musicians in a circle. Bojan Krhlanko (drums) and Žiga Ipavec (drums) started, then Krhlanko stopped playing, Ipavec was joined by Jure Boršič (saxophone), Ipavec stopped, Boršič was joined by Boštjan Simon (saxophone), and so on. When the circle finally closed and came back to Krhlanko, an extended group improvisation followed.

Art is supposed to be a mirror of its age. Contemporary academic, art, classical music has been already so specialised in character and expression that it can no longer address social, only individual aesthetic problems. But isn't precisely with improvisation that we can oppose this rigidity? Perhaps the means of expression of classical and improvised music are similar, but as the festival Sound Disobedience has once again proven, improvisation still aims for the collective, the present, the social.

You can watch the last day of the festival here and the rest of the performances here.