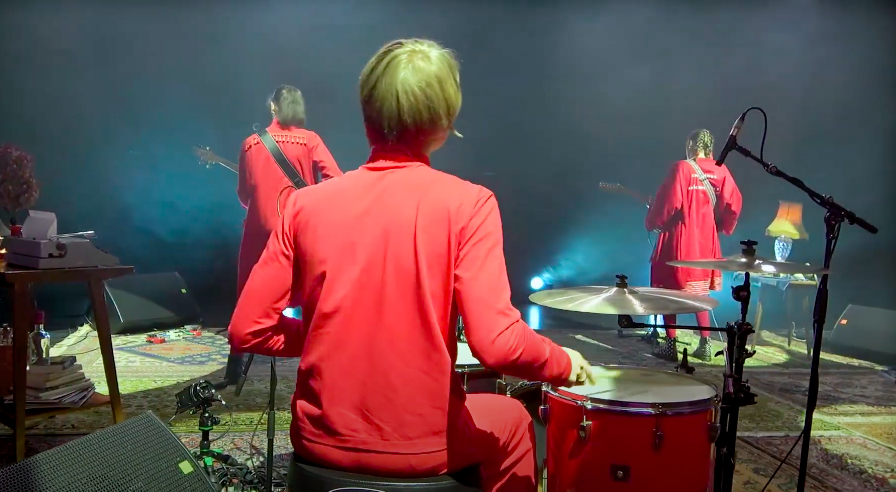 Back in May 2020, the central Slovenian institution of the contemporary music scene Kino Šiška announced the project Štream, a series of interactive live streams. In cooperation with ten music event organizers, the venue produced 14 interactive concert streams that took place on the main stage. More live streams followed in the second half of the year.

Since the coronavirus outbreak, these live streams have become the main music event on the Slovene music scene. This is why we have compiled a list of the Top 5 must-see performances, which took place at Kino Šiška in the last few months.

The Slovenian indie/alternative rock aces MRFY are currently locked in the studio working on their second album with the renowned producer Žare Pak. Even though they managed to play only a few shows in 2020, the band still marked the year with the summer smash hit “Zonzei” on which they collaborated with local avant-trap favourites Matter. This might explain the high expectations for their sophomore full-length, which was partly presented during their performance at Kino Šiška back in November. But the repertoire also included the magnificent cover of Lana Del Rey’s classic “Video Games”, which was followed by their track “BBY” from 2019. While we wait for the new LP, be sure to check this out—Lana would be proud!

About a year ago, the charming electro-pop duo that represented Slovenia at the 64th Eurovision Song Contest in Tel Aviv released its dreamy debut 4 and premiered it in front of a full Katedrala Hall. Despite the pandemic, their popularity kept growing both at home and abroad in the following months, with tracks continuously racking up streams and views in the millions. In August and September, they were number one on the INES#talent chart of the most promising acts in the EU. Due to circumstances, their second performance of 2020 at Kino Šiška, which took place in October, was quite different. The hybrid concert, which included both a live and an online audience, offered a rather more intimate and homely atmosphere. Besides, this was probably one of the last performances in Slovenia before the complete lockdown that followed. Watch the lovely performance of ‘box’ from last year's debut below.

Following a sold out debut show at Kino Šiška in 2019, in January the young Ljubljana rapper delivered another stunning performance with his band. Vazz has made a name for himself as one of the most prominent young hip hop artists in Slovenia. In just two years, the charismatic young poet released two really solid records that featured an enviable roster of local producers like YNGFirefly, Hyu and Emiljo AC. He has also been quite active during the epidemic, releasing a deluxe edition of his debut album as well as new videos, tracks and collabs (most recently with WCKD Nation). Watch the performance of his funk-infused track “Lakritis” from JACOB Deluxe below.

In 2020, the sensual pop act led by singer-songwriter Saša Vipotnik and guitarist Mario Babojelić presented its sophomore full-length Beautiful Disasters. The album showcased Vipotnik’s strong songwriting and caressing vocals and the exquisite musicianship of her fellow band members. “The voice is the real talent here,” claimed Žiga Pucelj in his review. Before lockdown, the band managed to present the album at festivals like MENT Ljubljana, Westway LAB and Waves Vienna. After a short break, AKA Neomi started working on a new EP. Some of the fresh material was presented during their performance at Kino Šiška but they also performed some of our favourite tracks from last year’s Beautiful Disasters. Watch the ethereal performance of “White Dove” below.

The eccentric post-punk trio is one of the most prominent young acts of the Slovenian underground. Following a string of d.i.y. EPs and albums, last November they released their first proper studio album sam pravm for the respected Ljubljana-based label Kapa Records. Under the lead of the charismatic frontwoman Kristin Čona, a modern-day Grace Slick, the band has become known for its cabaret-like performances. Despite their minimalist lo-fi aesthetic, they are successful in balancing various musical elements, including noise pop, krautrock, post-punk, psychedelia and more. Just add their absurdist and ironic Slovenian lyrics and we are ready to pogo. Check out their performance of “sam naprej” and “pesjan” from their recent Kino Šiška gig below.